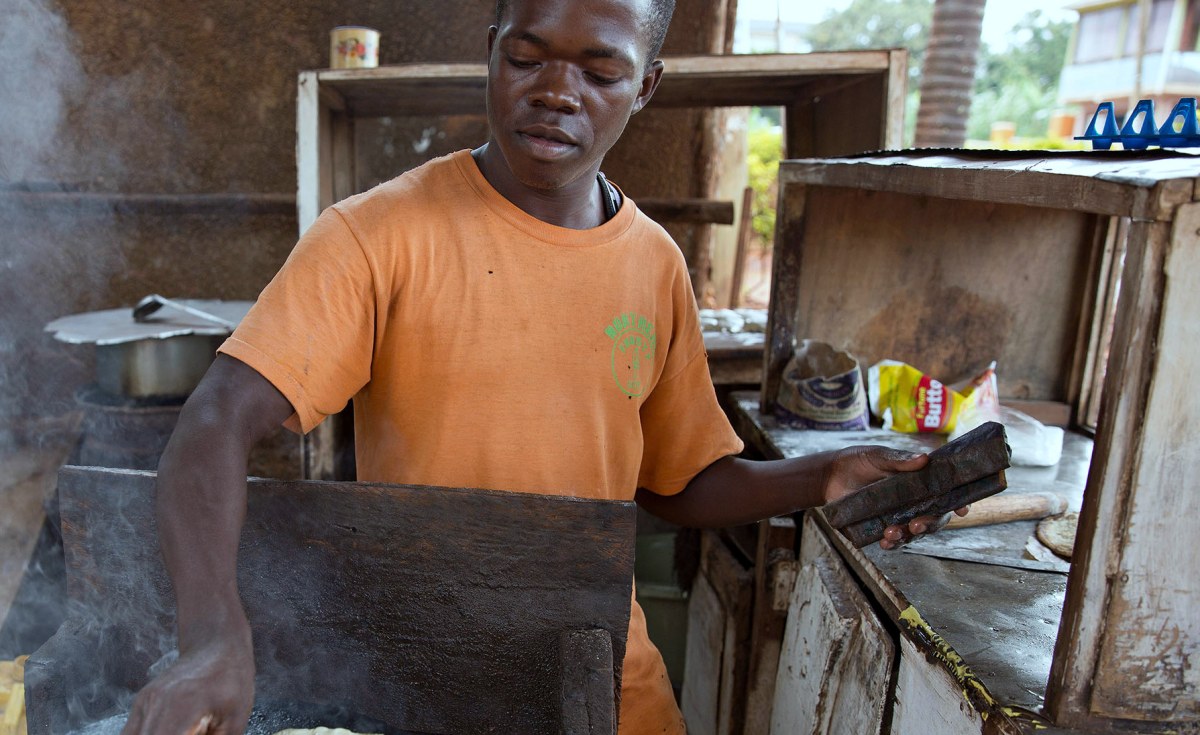 Arthur Woniala was in his last year of university, studying mechanical engineering, when his mother developed severe respiratory disease, after years of being exposed to smoke from cooking with charcoal in her tiny, poorly ventilated kitchen.

As soon as the 2016 school holidays arrived, he began developing a small system that would use waste materials to produce biogas, a safer alternative fuel for cook stoves. When it worked, somewhat to his astonishment, he joined with two friends to register Khainza Energy. The name means ‘a small person with energy and determination’ and is also his mother’s maiden name. The Ugandan company obtains organic waste from smallholder farms and local households to produce long-lasting cooking gas and package it in cylinders for sale to low-income households.

The company is committed to providing “clean, safe, and affordable cooking fuel solutions” for as many people as possible. According to the World Health Organisation, about three billion people in developing countries rely on firewood or charcoal for their daily cooking purposes. Smoke-induced diseases are responsible for the death of 4.3 million people every year. Women and children are among the worst affected by the consequences of smoke inhalation, with 500,000 children under the age of five dying annually due to acute respiratory infections.

The environmental impact of traditional cooking fuels is also costly. Uganda has lost 63 percent of its forest cover in the past 25 years due to tree-cutting for firewood, timber and charcoal, according to the National Forest Authority. In 2016, the country had 19,418 square kilometres under forest cover, down from 41,336 square kilometres in 1997.

Farm animals also harm the environment. An average-size daily cow can produce 80 pounds of manure each day. When spread on fields as fertilizer, it releases methane. But in a biogas system, the methane is captured and converted to CO₂ when the fuel is burned. Biogas fuel has zero net emissions, said Samuel Alexander, research fellow at the University of Melbourne, “because that CO₂ was going to end up in the atmosphere anyway through natural degradation”.

A 2017 report published in the journal Waste Management Resources, says when “biogas is used as a fuel for cooking, the global warming potential will reduce by 83 percent” compared with traditional wood or charcoal fuel.

Currently, some 80 percent of African households cook with dirty fuels that cost as much as half of the family’s income. Cleaner cooking fuels from renewable sources, like those produced by Khainza, cost less, help preserve soil fertility, and reduce the greenhouse gas emissions that contribute to unpredictable weather patterns and global warming.

Despite its lofty purposes and international recognition of its work, Khainza’s first three years have not been easy. Capital needed to start and expand a business is inaccessible to millions of aspiring young African entrepreneurs. But if funding and resources are acquired, small businesses can go on to contribute substantially to job creation and economic development.

Small and medium businesses account for more than 50% of total employment globally. In sub-Saharan Africa, they account for 89.2 percent of all employment, according to an International Labour Organisation report. The report advises that supporting small economic units should be a central part of economic and social development strategies.

Supporting small economic units, with the potential to grow, is at the heart of what the United States African Development Foundation (USADF) does. The independent government agency established by the U.S. Congress invests in African grassroots organizations, entrepreneurs and small and medium-sized enterprises. Utilizing a community-led development approach, USADF goal is to provide seed capital and local project management assistance to improve lives, while addressing some of Africa’s biggest challenges around food insecurity, insufficient energy access, and unemployment, particularly among women and youth.

Khainza is one of the businesses receiving USADF support. That backing, plus support from other organizations such as Seed https://seed.uno/, a global partnership for action on sustainable development, has enabled Khainza to dream big.

Now, those dreams are vulnerable to a new threat.

With Uganda locking down to prevent the spread of Covid-19, Woniala realized that Khainza could not conduct business as usual. President Yoweri Museveni has eased restrictions, but public gatherings are still banned, schools remain closed, and social distancing measures are being enforced.

Before the lockdown, Khainza Energy had contracts and obligations to fulfil, including a contract to conduct an Environmental Conservation and Recycling course to 1,400 students over a period of eight months, and an agreement with a foundation in Uganda to deliver biogas systems and briquette production plants to a school. Thse contracts were suspended before the company could secure the funds.

Woniala says business operations stalled almost completely by March 31st. The enterprise quickly had to find low-cost strategies to align their vision with the environment they had been plunged into, identifying what is still working and what has become obsolete.which makes it easy to order cooking fuel remotely”, Woniala said. “We have also been able to acquire a pick-up truck to facilitate home deliveries for LPG [liquid petroleum gas], briquettes and improved cook stoves. We are in the process of acquiring a [freight] tricycle to facilitate last-mile deliveries”.

USADF funding has been critical to that re-thinking process. “Through the USADF support we were able to develop the Khainza Energy App, a mobile application Woniala said the company was able to acquire 10 acres of land for their biogas production plant and Khainza Energy College, but unfortunately has not yet been able to transfer the land title to the company’s name, because the Uganda Land Board is closed due to the outbreak of the pandemic. Nevertheless, he thinks future prospects are good.

“Through support from USADF, we are now confident that we shall be able to generate much needed revenues, which will enable us to retain our newly skilled youth – at least until our contracts are flagged off,” he said.

The company’s next hurdle is acquiring inventory – cylinders and accessories – to serve their customer base of 63,720 smallholder farmers. Woniala believes that this is only the beginning of the Covid-19 pandemic, and that there will be future waves, which might necessitate more drastic interventions. Adaptation was needed, he said, to transform safe, convenient fuel delivery during a pandemic into a fully sustainable business.

The company is seeking funding of about US.$75,000 to invest directly in the distribution and supply of LPG to smallholder farmers living in off-grid markets. Woniala hopes that with such networks in place, the communities Khainza serves will be in a better position to fend off the pandemic and minimize the effects on people’s well being, the environment and the economy.