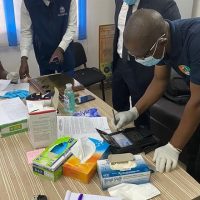 When extremists attacked a Côte d’Ivoire checkpoint last month at the border with Burkina Faso, killing several Ivorian military personnel, the incident underscored growing concern that the threat of West Africa’s armed groups was creeping into yet another nation.

At least 30 suspected militants including Burkinabe leader Ali Sidibe were arrested, while authorities seized weapons, ammunition, USB keys and mobile phones. Another 40 suspects – sixteen of them from Côte d’Ivoire – were arrested in May during joint counterterrorism operations along the border.

Now INTERPOL is assisting both nations in the use of biometric data during investigations. To date, biometric data on 37 suspects has been entered into INTERPOL’s databases and shared with its 194 member countries to identify any links with other attacks and individuals.

“The COVID-19 pandemic is not stopping terrorist activities, which means law enforcement operations must, and will, continue to address these threats,” said INTERPOL Secretary General Jürgen Stock.

“Sharing that information with our member countries then reinforces INTERPOL’s role as a global early warning system, enabling police to make connections which would otherwise not be detected,” he added.

More than a million suspects, documents, financial accounts and other entities linked to terrorism in the Sahel and beyond are in the database, including 85,000 foreign fighter profiles.

INTERPOL’s regional counterrorism base in Abidjan is now offering assistance to counterparts in Ouagadougou to collect biometric data on some of the other suspects arrested in the counterterrorism operations.