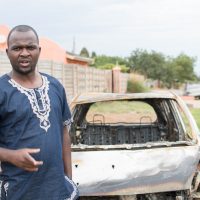 In Zimbabwe, friends and supporters of political activist Patson Dzamara are mourning the news that Dzamara has died while awaiting medical treatment.

Dzamara, 34, was a human rights defender who opposed the ruling Zanu PF party and was active in calling for change during the end of former president Robert Mugabe’s long tenure and the transition to President Emmerson Mnangagwa’s. He was a frequent target of the government whose own brother, Itai, went missing in March 2015.

“I’m so devastated,” said Nelson Chamisa, head of the Movement for Democratic Change (MDC) Alliance party and a former presidential candidate who remains a top Mnangagwa rival. “The young Dr. Patson Dzamara gone too soon. This has been a terrible 2020!”

“Words fail me. I’m devastated,” said Mawarire, the high-profile pastor behind Zimbabwe’s #thisflag movement who pressed for economic and political change as the country remained in crisis.

“The young man is gone. I can’t believe it,” added Mawarire.

Dzamara was recently diagnosed with colon cancer and hoping to raise money for treatment at the time of his death, but he remained positive in the face of his health challenges.

“Spent last night moving from one medical facility to another for medical attention,” he said in a message in late July. “Saw frail and hopeless people. Saw people in pain. Saw people crying after losing their loved ones. One person in the next room died. You are still alive and well? Be grateful and make it count.”