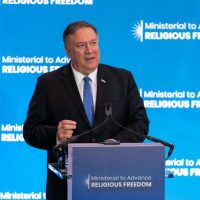 A specifics-free statement about “African elections,” issued by the Department of State in the United States, caught some attention Thursday even as the 2020 presidential elections continued to be chaotic in the U.S. itself.

The statement from the department led by Mike Pompeo expressed U.S. commitment to free, fair and inclusive elections,  while insisting that the “conduct of elections is important not only for Africans, but also for defenders of democracy around the world.”

“Repression and intimidation have no place in democracies,” the statement continued. “The right to peaceful assembly and freedom of expression and association are at the heart of a functioning democracy.”

The U.S. went on to say it will “watch closely” and not hesitate to impose sanctions on those interfering in African elections or related violence, but it never specified the reason for the message.

The statement came as a disrupted U.S. elections process, just weeks away from a final Nov. 3 vote, was further strained by the news that President Donald Trump refuses to debate his opponent, former U.S. vice president Joe Biden. The Biden campaign sought to hold a virtual rather than in-person debate because of Trump’s recent COVID-positive diagnosis.

It also comes as U.S. officials announced 13 people associated with an armed group in the state of Michigan were arrested in connection with a plot to attack Gov. Gretchen Whitmer, a Democrat who has been a frequent target of Trump. It’s the latest incident to lay bare the depths of political and social unrest in the U.S.

The irony was not lost on social media, where many were quick to note that the U.S. has its own electoral divisions to worry about and encouraged the African Union to send an observer mission to the U.S. instead.

“They should focus more on themselves,” said one Twitter user. “The U.S. right now is barely a pillar of democracy.”