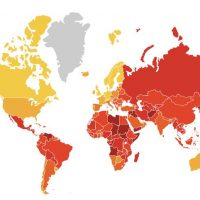 Sub-Saharan Africa again was the world’s lowest-ranking region in the 2019 Corruption Perceptions Index, released Wednesday by the Transparency International (TI) organization based in Berlin, Germany.

The report painted “a bleak picture of inaction against corruption,” the NGO said, with some countries –  Liberia, Madagascar and Malawi among them – showing some of the greatest setbacks in good governance.

The Democratic Republic of Congo also was among low-scoring countries, with a recent TI report showing 79 percent of its citizens believe that all or most parliamentarians are involved in corruption.

The report covers 49 countries in the region, with Somalia, South Sudan, Sudan and Equatorial Guinea having the worst rankings overall. The news wasn’t all bad, with the Indian Ocean island of Seychelles holding the highest score, followed by Botswana, Cabo Verde, Rwanda and Mauritius.

“While the Seychelles struggles with issues of money laundering, which is not measured by the CPI, several anti-corruption laws, including a recent access to information law, and a newly established anti-corruption commission have helped strengthen the country’s anti-corruption framework,” said TI. “In addition, despite some restrictions, dialogue between civil society and government occurs through a national civil society platform.”

Nations showing overall improvement since 2012 are Senegal and Côte d’Ivoire, but the TI report warned that both countries have slipped on transparency and corruption since 2016.

To view the complete report, see the Transparency International link.