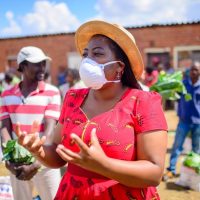 In Zimbabwe, the international community joins local groups in their concern over the latest arrest of opposition leaders, this time three women including Movement for Democratic Change (MDC) MP Joanah Mamombe.

Mamombe, along with MDC leaders Cecilia Chimbiri and Netsai Marowa, has been missing since Wednesday after participating in protests against poverty and hunger exacerbated by Zimbabwe’s coronavirus pandemic lockdown.

The Zimbabwe Lawyers for Human Rights (ZLHR) organization filed a habeus corpus motion Thursday to insist that police account for their whereabouts.

The case of the missing women has drawn attention from Canada, the United Kingdom, the United States and the European Union. “Three MDC officials are missing since yesterday after protesting food shortages. We are concerned and urge police to locate them,” said the U.S. embassy based in Harare. “We hope they are safe and sound.”

Canada echoed the U.S. plea, while the EU expressed its concern that the three still remain missing. “We urge authorities to swiftly, and in line with constitutional and legal obligations, assist lawyers and relatives to establish their whereabouts and well-being,” the EU said.

While MDC leader Nelson Chamisa and the opposition party have long been under fire, they say President Emmerson Mnangagwa has targeted MDC members during the COVID-19 response. The party announced last week a withdrawal from participation in parliament following a disputed recall of some MDC MPs, amid a rift over the identity of the MDC party and its affiliations.

ZLHR has been tracking previous arrests of labor leaders and protesters, alongside those charged with “insulting” Mnangagwa. Now Mamombe, Chimbiri and Marowa have added to their number.

“The missing three are yet to be found,” said the MDC late Thursday. “Families are distraught. The police insist they never arrested them.”