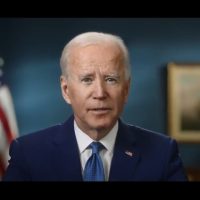 Democratic presidential hopeful Joe Biden, the former vice president of the United States under Barack Obama, has emerged as the clear leader in Tuesday’s U.S. election, but there is still no official call on a race that makes clear the  deep divisions among U.S. voters and raises red flags about President Donald Trump’s strategy moving forward.

Biden addressed that tension in an address late Friday that focused on unity and calm, even as protesters took to the streets in cities like New York and Phoenix and threatened attacks on a vote tallying center in Philadelphia.

“We don’t have a final declaration of victory yet, but the numbers tell a clear and convincing story: We are going to win this race,” Biden said with vice-presidential running mate Sen. Kamala Harris of California by his side.

The Biden-Harris ticket has racked up more votes than any U.S. presidential race in the history of the nation, and Biden leads Trump by more than 4 million votes heading into the weekend. Biden also has pulled ahead in the still-unresolved vote counts in the key states of Arizona, Georgia, Nevada and Pennsylvania.

But Trump is refusing to concede the loss, and has told supporters he plans to pursue every possible legal challenge in order to stay in office. Some members of his own Republican Party, including former New Jersey governor Chris Christie, are distancing themselves from Trump claims of fraud and the instability that may follow what they describe as incitement.

With a fast-shrinking pool of votes left to count, Biden’s lead in at least three of the four pending states appears secure and U.S. political observers hope for a decision within hours or days.

“We both know tensions can be high after a tough election, the one like we’ve had,” Biden said. “But we need to remember, we need to remain calm, patient, and let the process work out as we count all the votes.”