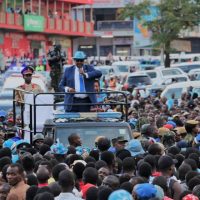 Malawi’s top court has thrown out the results of a May 2019 presidential election, one that saw President Peter Mutharika and his Democratic Progressive Party gain a disputed second term that was challenged immediately by the political opposition.

The five judges have ordered a new election to be held within 150 days, according to media reports.

The hearings began in August with testimony from Saulos Chilima, a vice president under Mutharika who ran as the United Transformation Movement (UTM) party and received 20.2 percent of the vote. He joined with Lazarus Chakwera of the Malawi Congress Party (MCP), who had received 35.4 percent, and other opposition leaders in filing a legal challenge based on what they said were numerous irregularities with cases of violence or intimidation.

The incidents involved arrests for suspected interference with polling operations, and at least one assault on a parliamentary candidate who was accused of giving cash to voters.

Electoral violence and ongoing protests, including a bombing of MCP headquarters in Blantyre, kept the nation’s attention for months as opposition leaders and their supporters refused to accept the election results and demanded the resignation of Malawi Electoral Commission chief Jane Anseh.

Security was tight in and around Lilongwe ahead of the decision, which saw the courts determine that the Malawi Electoral Commission failed to provide the nation with a free and fair election and credible results, ultimately infringing on the rights of citizens.