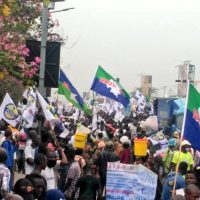 Opposition leader Martin Fayulu made his return to the Democratic Republic of Congo on Saturday, immediately meeting with supporters in Kinshasa who still believe he is the rightful winner of controversial December 2018 elections that saw President Felix Tshisekedi take office instead.

Fayulu arrived from the United States, where he and Adolphe Muzito – presidents of the Engagement for Citizenship and Development (ECiDé) and Nouvel Elan parties, respectively – were delayed since March when the coronavirus pandemic struck. Both men are members of the Lamuka coalition that backed Fayulu as a candidate to replace longtime leader Joseph Kabila.

Fayulu told Lamuka voters that he wants to see an end to corruption, the establishment of early elections and a host of institutional reforms in DR Congo.

“Not just the electoral law,” he told local media outlets covering the rally. “We need all the reforms: the electoral law, the CENI, etc. We want governance reform. We are not going to let people continue to embezzle people’s money.”

The Congolese opposition has continued to protest against Tshisekedi and the CAP for Change (CACH) government aligned with Kabila’s Common Front for the Congo (FCC). Fayulu and opposition leaders have long charged that Kabila maintains a powerful hand in Congolese affairs, even as close Tshisekedi ally Vital Kamerhe was sentenced in June to 20 years of forced labor for embezzling public funds.

The corruption and continued political crisis, alongside long-running regional conflict and both Ebola and COVID-19 outbreaks, mean that Fayulu returns to a Congolese nation under ever-increasing pressure. Fayulu has promised a massive protest at the People’s Palace, the site of the country’s legislature, to ensure that leaders hear the demand for change.