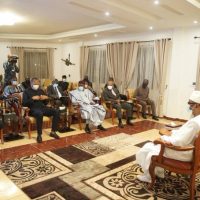 The head of the African Union Commission has called on Malian activists to remain peaceful, as the country enters another week of protests calling for an end to President Ibrahim Boubacar Keïta’s administration.

The appeal from AU Chairman Moussa Faki Mahamat follows demonstrations on Friday, when thousands of people in the streets of Bamako were dispersed by authorities using tear gas.

“Mahamat is deeply concerned by the serious crisis that has plagued Mali since the popular demonstrations of June 5, 2020,” the AU said in a statement on Monday, referring to the start of the protests earlier this month.

“The President of the Commission welcomes the peaceful character so far assumed by these demonstrations and strongly encourages all actors to avoid the use of violence in any form,” the statement said. “The Chairperson of the Commission urges the parties to work together to find consensual solutions to end the crisis.”

Mahamat also offered AU support to the Economic Community of West African States (ECOWAS), the 15-member body that sent a team last week, above, to meet with Keïta to discuss Mali’s political crisis.

Frustrated Malians, now living under the added economic and public health pressures of the COVID-19 pandemic, have lost patience with the government’s ability to meet Mali’s security challenges while extremist attacks continue.  Those tensions were sharpened by the outcome of recent legislative elections, and the March abduction of opposition leader Soumaïla Cissé. He remains missing but is believed to be alive, according to Keïta.

Also urging restraint in Mali is United Nations chief António Guterres, who issued a statement similar to Mahamat’s over the weekend.