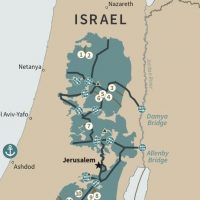 “South Africa believes that it is only initiatives developed with the full participation of the people of Palestine that can achieve lasting peace,” said DIRCO, the country’s foreign ministry. It emphasized the key issues of internationally recognized 1967 borders, the determination of East Jerusalem as a Palestinian capital, and the need for a meaningful two-state solution.

“South Africa maintains its principled position that any peace plan should not allow Palestinian statehood to devolve into an entity devoid of sovereignty, territorial contiguity and economic viability,” the ministry said. “Doing so would severely compound the failure of previous peace-making efforts, accelerate the demise of the two-state option and fatally damage the cause of durable peace for Palestinians and Israelis alike.”

Trump and Netanyahu advanced a two-state vision the U.S. president said was a “win-win” for both sides, and represented the first time Israel has provided a clear territorial map to the Palestinian side. The U.S. “Peace to Prosperity” plan maintains, however, Israel’s right to security in a place with “extraordinary geographic and geostrategic challenges” with “no margin for error,” which raises questions about Palestinian sovereignty.

The Palestinian Authority has requested an emergency meeting of the League of Arab States, which counts 10 African nations among its membership. Ahmed Aboul Gheit, the secretary general for the league, says member nations are reviewing the plan but on first reading find it unfair to the Palestinian people.