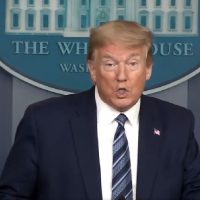 Ghanaian President Nana Akufo Addo was among the world leaders quick to send encouragement to United States President Donald Trump following the news that Trump and his wife, Melania, tested positive for the coronavirus.

“My wife Rebecca and I send best wishes,” said Akufo Addo, who was exposed to the COVID-19 virus himself in July. “We wish them a speedy recovery.”

Trump’s diagnosis was announced on Friday and was followed by a wave of COVID-positive tests among key leaders of his government, including close advisers Chris Christie and Hope Hicks. A number of other prominent people who attended a White House reception last weekend for Supreme Court nominee Amy Coney Barrett also tested positive.

Trump was taken by helicopter to the Walter Reed National Military Medical Center on Friday, but an update from Dr. Sean Conley, the president’s physician, sounded an encouraging note on Trump’s condition.

“The team and I are extremely happy with the progress the president has made,” Conley said during a Saturday press conference. He said the U.S. president has suffered COVID symptoms including fatigue but is now free of fever and does not require oxygen.

Alongside Akufo Addo in his well-wishing was President Emmerson Mnangagwa of Zimbabwe, who said he hoped that the Trumps have a full and speedy recovery.  They joined the leaders of India, Russia and beyond in expressing their concern at the news.

Trump’s COVID diagnosis comes just a month before a highly contentious presidential election in the U.S., and follows a Tuesday debate between Trump and Democratic Party challenger Joe Biden, the former vice-president during Barack Obama’s administration. Biden and his wife, Jill, have so far tested negative for the virus.