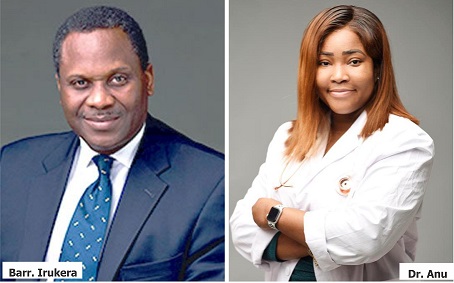 The social media was abuzz in the last few days with the news of the arrest and purported arraignment of Dr Anuoluwapo Adepoju of Med Contour Services Limited, a Lagos-based medical Doctor, by the Federal Competition and Consumer Protection Commission, FCCPC, over the death of one of her clients, Mrs Nneka Onwuzuligbo.

According to the FCCPC, Dr Anu Adepoju and her hospital were arraigned for allegedly obstructing the investigation by the commission into the case which led to the closure of the hospital for more than two months now.

However, the events of the last few days by the FCCPC and its chief executive officer who is also the prosecuting counsel, Mr. Babatunde Irukera, have drawn the curious eyes of the public over the handling of the case.

The recent actions of Barr Irukera have raised eyebrows and questions are being asked as to his personal involvement in the case which borders on vendetta.

Some of the questions begging for answers over the case are: How else can we explain why the FCCPC would get involved in a case that is outside its jurisdiction? Why would Mr. Irukera the CEO of a Federal Government agency personally come to Lagos from Abuja and invade Dr Anu’s clinic with a team of policemen without a search warrant or any legal backing of any sort?

Why does he appear to have an obsessive interest in Dr Anu’s case? In whose interest is he hellbent on circumventing the law just to embarrass Dr Anu? Why would a self-acclaimed lawyer act in this manner?

One would think the involvement of the CEO of the FCCPC will ensure that the agency follows the tenets of the rule of law. To compound matters, together with erring officers of the police, he orchestrated arrest of Anu, making her spend three days in the State Criminal Investigation Department, Panti.

He personally mandated the Police not to grant Dr. Anu administrative bail and claimed the orders to lock her up were supposedly from the Inspector General of Police.

What do we make of the fact that Mr Irukera goes around intimidating innocent people using the Vice President Prof. Yemi Osinbajo’s name? Is the vice president aware that a public official is making such vile threats with his good name?

Barr Irukera filed information about Dr Anu since the 3rd of June 2020 and did not serve her a copy as demanded by law. She only became aware of the charges in court on the 3rd of July 2020.
He was duly scolded by Justice LIMAN J. of the Federal High Court, Ikoyi Lagos for failure to duly and properly serve Dr. Anu the frivolous allegation levelled against her before the beginning of trial.

Before Dr Anu was arraigned, Mr Irukera went ahead to give the press uncertified court copies of proof of evidence, and affidavit of completion of investigation. Mr Irukera has made himself the regulator, enforcer, investigator, prosecutor and judge in this case.

It is high time the Honourable Minister of Health, Dr Osagie Ehanire and other relevant medical authorities cautioned Mr Irukera as he has no grounds to harass Dr Adepoju.

Vice President Yemi Osinbajo should immediately call Mr Irukera to order. He should be compelled to stop dragging the name of a well-respected individual in the mud with his gutter tactics.

This is also a clarion call on the president, Muhammadu Buhari to look into Mr Irukera’s activities as they are not befitting of the prestigious office which he holds. His actions bring disrepute to the efforts of Mr President to better the lot of Nigerians.