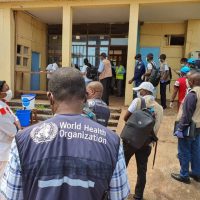 The Africa director for the World Health Organization says health professionals are rushing to Mbandaka, a border city in Democratic Republic of Congo where a fresh outbreak of the Ebola virus is reported.

“This outbreak is close to transport routes and borders, so a speedy response like this is all the more important,” said Dr. Matshidiso Moeti, the WHO regional director, on Thursday. Moeti said UNICEF, World Food Program and other partners are converging to support the DR Congo health ministry as quickly as possible.

The cases in Mbandaka, a Congo River community near the border with Congo Brazzaville, were announced on Monday. It is the same region that saw a short-lived Ebola outbreak in 2018, one that was easier to contain than the prolonged outbreak in the eastern Ituri and Kivu provinces. More than 3,400 cases are reported in that ongoing outbreak, with at least 2,280 fatalities.

Moeti said the two Ebola outbreaks confronting the Congolese are not likely to be related, but WHO is working with the country’s national health institute to complete gene sequencing to determine if that’s the case.

“It’s happening at a challenging time, but WHO has worked over the last two years with health authorities, Africa CDC and other partners to strengthen national capacity to respond to outbreaks,” said Moeti. News of the new Ebola cases comes as African nations continue to battle the spread of COVID-19 and other public health threats.

The new Ebola outbreak originally involves six cases, three of them confirmed with four fatalities among them.