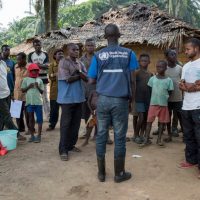 There are disappointing trends in the Ebola fight in Democratic Republic of Congo, where an uptick in reported cases and increased attacks by extremists in the affected eastern provinces dampen optimism that health workers are gaining ground.

CMRE, the Congolese agency overseeing the Ebola response, listed five health zones Sunday where new cases have been reported since the beginning of December, all of them in North Kivu and Ituri provinces. The community in Mabalako accounted for two-thirds of all new cases through December 10, according to the World Health Organization, with CMRE adding additional cases and fatalities in its update.

Beni, Mandima and hard-hit Oicha also reported new cases in what WHO called a “substantial” increase. “The majority of these new cases are linked to a single chain of transmission, in which one individual was a potential source of infection for 17 people,” said WHO in its December 12 situation report.

What’s unusual is that the person at the center of this web of Ebola contacts has been diagnosed for the second time within six months, prompting an investigation because of the rarity of that occurring.

All told, CMRE says it’s the highest number of cases since early September. The rise coincides with increased violence in the affected regions, with a new attack on civilians claiming 22 lives in Beni on Saturday night.

WHO director Dr. Tedros Adhanom Ghebreyesus, writing for The Guardian last week, said there were 390 attacks against Ebola health workers this year, with 11 killed and 83 injured. WHO also confirms 169 health workers who contracted Ebola, with at least 41 fatalities.