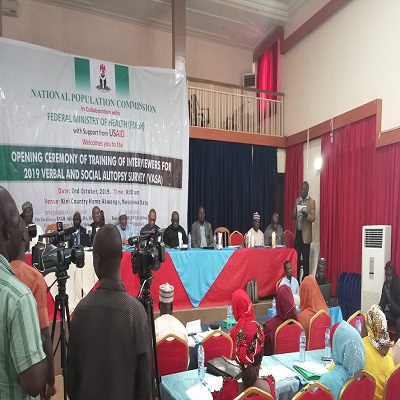 Severe bacterial infections account for the largest portion of neonatal deaths in Nigeria, the 2019 Verbal and Social Autopsy (VASA) study has revealed.

It states that the three leading causes of neonatal deaths were sepsis, intrapartum-related injury and pneumonia.

The study further reveals that malaria, diarrhoea and pneumonia were the top three causes of deaths in children aged one to 59 months.

The Verbal and Social Autopsy (VASA) repost was launched by the National Populations Commission (NPC) during the zonal dissemination seminar organized by the Commission which was both virtual and in-person in Minna, Niger state.

The Federal Commissioner of the National Populations Commission, Barrister Aliyu Datti explained that the 2029 Verbal and Social Autopsy Study which is a follow up to the 2018 NDHS was conducted to estimate the causes and determinants of neonatal and under-five child mortality.

He stated that the report would help in assisting policymakers plan and formulate policies for the health sector about infant and child mortality in Nigeria adding that data from the 2019 VASA survey will ensure that planning in the health sector is evidence-based and will ensure maximum utilization of resources in that sector.

The Federal Commissioner who was represented by the Niger State NPC Director, Mallam Uthman Baba said the 2019 VASA report was conducted by the NPC in collaboration with the Federal Ministry of Health and other agencies adding that the 2019 VASA survey was the second in the series, the first being conducted in 2014.

Baba further said that the situation the nation finds itself especially with the content of the report is one that calls for concerted efforts by all stakeholders to rise and spur into action to provide the enabling environment for our young ones to survive and grow into adulthood.

“The conduct of the 2019 VASA survey marks another major step by the National Population Commission in collaboration with Federal Ministry of Health and other agencies to respond to the national imperative of providing adequate and relevant data for national planning, particularly in the health sector.

“The VASA Survey is therefore meant to provide policymakers with accurate and timely data to formulate courses of action designed to help guide the government in proper stakeholder engagement, policy and programme implementation to reduce under-five deaths to the barest minimum in Nigeria.

“The Survey will also provide a substantial amount of household-based data needed in Nigeria and the outcome of the survey will inform programming that would improve levels of health care delivery as well as facilitate equitable access to quality care for all children.”

Baba then appealed to stakeholders in the health sector to avail themselves of the huge data generated by the 2019 VASA survey in the planning, execution and

evaluation of health programmes for infants and children in the country.

“Effective planning in the health sector is, therefore, necessary to improve the quality of the nation’s human resources. It is my sincere hope that the Report of the 2019 VASA study will serve as a tool of reducing under-five mortality in Niger state and Nigeria in general,” he said.

Launching the report, the Wife of the Niger State Governor, Dr Amina Abubakar Bello noted that the VASA report is coming at an appropriate time when the State is strategizing on addressing infant mortality rate.

Bello who was represented by the Commissioner of Women Affairs stated that the report will impact on the lives s of the children appealing to the funders and the development partners of the report to support the efforts made in addressing the enormous health challenges the state faces.

“I also want to assure you that the state government would work assiduously to ensure that the recommendations of the report would be pursued.”

The Secretary of the Niger State Government (SSG), Ahmed Ibrahim Matane commended NPC and its partners for the report describing it as an evidence-based report that can be used by policymakers to improve the health sector.

Matane who was represented by the Permanent Secretary, Economic Affairs, Alhaji Baba Wachiko stressed on the need for stakeholders to look for ways of tackling the challenges that were highlighted in the report.

“On this report, the state government will key into it and work to ensure that we no longer have neonates and under-five children deaths in the country.”

The report recommended the accelerated implementation of key, existing intervention programmes for the identification and management of newborn infections at community and first-level health facilities and case management of common childhood illness in the community.

The report further recommended the scaling up and strengthening implementation of the community health influences, promoters and service programme (CHIPS) and improve the management of the integrated management of childhood illness programme for primary level facilities.