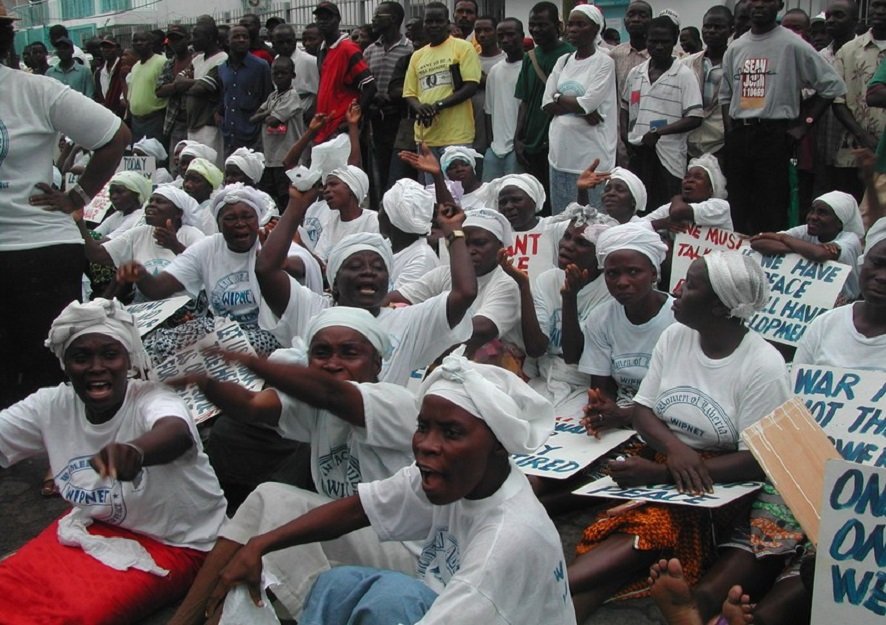 For all those who read it, especially students who took the liberal arts in college, Aristophanes’ Lysistrata presents an intriguing and unforgettable sociopolitical quagmire connected to the moral marshlands of sexual intercourse.

Should you or should you not weaponize sex in pursuit of a goal, however noble? How does weaponizing sex perpetuate harmful gender stereotypes and an unfair balance of power?

These questions have their place and time. But in the last two decades, women in a handful of countries have pragmatically withheld or threatened to withhold sex in order to force a compromise in some political fracas.

Indeed, there are documented pieces of evidence of this strategy across the continent of Africa but the most prominent example remains what the Women of Liberia Mass Action for Peace (WLMAP) achieved in 2003 during Liberia’s brutal second civil war.

Formed by social activists Crystal Roh Gawding, Leymah Gbowee and Comfort Freeman, the WLMAP gained global recognition for their role in bringing together then-President Charles Taylor and the two rebel factions, Liberians United for Reconciliation and Democracy (LURD) and the Movement for Democracy in Liberia (MDL) to peace talks in Accra, Ghana.

It has to be noted that none of the parties had planned on a ceasefire but through relentless campaigns and protests, the voices of thousands of women, brought together by the WLMAP, were heard. For instance, the WLMAP secured a promise from President Taylor that he would be in Accra for the talks when some mediators thought it was unlikely the head of state would show up in the Ghanaian capital.

But the process leading up to the talks as well as the negotiations themselves were quite intriguing. Having come across as de facto women’s campaign for peace, the WLMAP encouraged women to withhold sex from male partners in order to put pressure on the warring groups.

If there is any doubt that the strategy worked, one can look back and see that within months of the announcement of the initiative, peace talks were on the table.

Perhaps, we may not give all the credit to the WLMAP in a process where the international community was heavily involved. However, it was not the only time the women of the WLMAP used their sexuality purposively during the peace process.

While talks were ongoing, it is reported that WLMAP women, all clad in white clothes, surrounded the venue. Anytime any of the parties in the talk threatened to leave, the women threatened to take off all their clothes to expose their nakedness.

The threat of nudity is credited with expediting the talks. But the success of Liberia’s sex strike and threats of nudity, in order to make sense, should be looked at in terms of the peculiarity of Liberian history.

As one of the founders of the WLMAP, Gbowee, said in 2013: “When we started the process in 2003, we had been through 14 years of war. Rape was the order of the day. A lot of the women who protested beside me were victims of rape, maybe once, twice or three times”.

“We all decided we were going to put the brokenness of our bodies out there…[most of the women] had no idea what a non-violence protest was. We were doing trial and error [until] one Muslim woman said ‘let’s do a sex strike’”.

Gbowee added that surprisingly, rural Liberian women were very successful in this stead than women in the capital Monrovia because of religion. As a point of keeping one’s self in tune with spirituality in seeking the divine intervention for peace, rural women convinced their partners that they had to forgo sex while families prayed for peace to prevail.

But what the whole success of the sex strike proved was that women in Liberia, a country where one in two has been raped at least once in the last two decades, turned the power that men historically had over women’s bodies into a weapon for peace. Strength from their hurt and with that they bargained for societal stability.

In Togo, another West African country, the story of a widely-publicized threat of a sex strike was less dramatic but is equally remembered as one of the more recent memories of African women daring to do things differently. Of course, the dynamics are different than Liberia’s but in 2012, Isabelle Ameganvi, a Togolese politician and women’s rights activist, had no qualms embarking on a campaign to ask women to “lock up the gate of the motherland”.

Ameganvi’s call had come after it became clear that Faure Gnassingbe, son of Eyadema, had every intention of holding on to power as long as possible. Ultimately, the house Gnassingbe prevailed but Ameganvi has no regrets.

Since then, women’s interest groups in South Sudan, Ethiopia and Uganda have all called for sex strikes with varying degrees of success. But with increasing access to education and gradual growth in economic access, who is to say we may not soon see another hugely successful sex strike by African women?