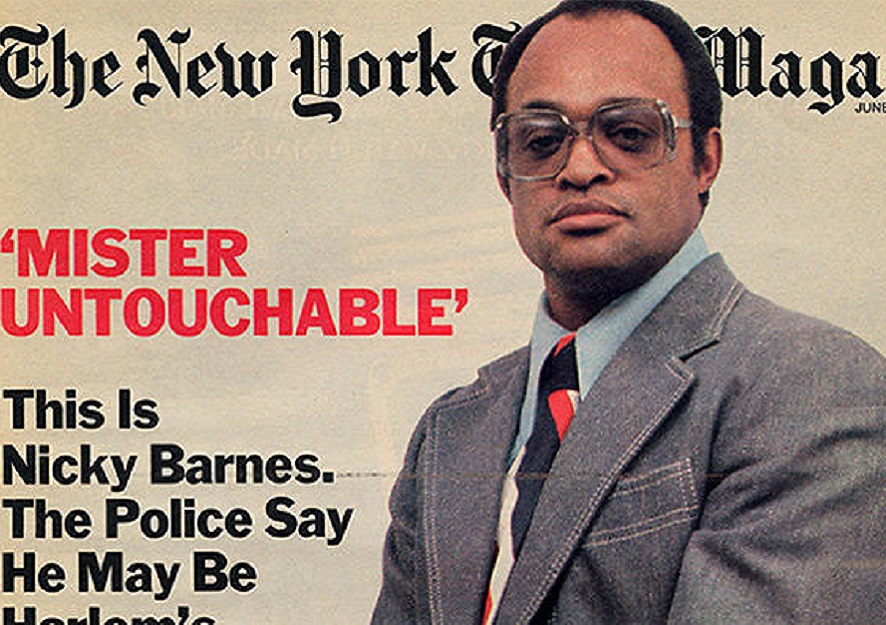 “You can’t have The Times write about you if you are a gangster and expect to get away with anything. Successful gangsters cannot be known.” Those were the words of columnist Pete Hamill in 2017, referring to druglord Leroy Nicholas Barnes’ appearance on the cover of The New York Times magazine.

At the time of that magazine feature, the New York drug lord had gained the name Mr. Untouchable, following his record of avoiding conviction despite being a notorious criminal.

Perhaps that same feeling that he could not be caught, that he was powerful and had the support of locals and others who adored him, convinced a sharp-suited Barnes to appear on the cover of the New York Times Magazine in 1977 under the headline “Mr Untouchable” and with the caption: “The Police Say He May Be Harlem’s Biggest Drug Dealer. But Can They Prove It?”

Well, this time they did. The New York Times reported in 2019 that the ostentatious drug lord’s story offended then US president Jimmy Carter so much so that he ordered Barnes prosecuted “to the fullest extent of the law”.

The drug kingpin, who had taunted authorities for a very long time, was put on trial in 1977, convicted and sent to prison for life without parole. He spent more than 20 years behind bars before testifying against his former associates and later being released into the federal witness program under a new identity. Now living a “hidden life”, Barnes virtually disappeared, and because he was under the federal witness program, his death in 2012 was never reported until seven years later when his children revealed it to the public.

Robert B. Fiske Jr., the U.S. attorney in Manhattan in 1977, who was informed of the drug kingpin’s death in 2019, told the Times that Barnes had run “the largest, the most profitable and the most venal drug ring in New York”.

In 1977 after Barnes’ arrest, he was found guilty of leading a major drug distribution enterprise in Harlem, New York, that had conspired to sell, wholesale, $1 million in heroin a month, according to reports.

The notorious criminal had grown up as an altar boy but was also arrested on robbery charges before he was 10. Never attending school after junior high, he fled his abusive home, became a junkie on Harlem’s streets and was later sent to rehab in Lexington, Kentucky.

Then he started stealing cars and was arrested several times on charges of possession of burglary tools. He was confined in Lower Manhattan’s Tombs and then Green Haven Correctional Facility in upstate New York, where he converted to Islam.

But it was in the late 1960s that he began flooding Harlem and other black neighborhoods with heroin. Barnes had then become the kingpin of an empire that imported and distributed millions of dollars worth of heroin in New York, Pennsylvania, and Canada while ensuring any business rival is killed. A smart Barnes invested the profits from the drug trade in real estate and other assets, later becoming a millionaire.

During this period, the Times said he owned “as many as 200 suits, 100 pairs of custom-made shoes, 50 full-length leather coats, a fleet of luxury cars and multiple homes and apartments”.

When he was released from prison in 1998, a flamboyant Barnes ran automatic car washes, according to reports, and he also seemed pleased with the witness protection program.

“The anonymity that cloaks Middle America is the life I’m comfortable with, and what I want to be,” he said in a 2007 Times interview.

“I want to get up every day and get in the car and go to work and be a respected member of my community,” Barnes said. “And I am respected.

“I’m not looking in the rear-view mirror to see if anyone is tailing me anymore. I don’t turn on the blender when I’m at home so I can talk. That is not a part of my life. Sure, I’d love to have more money, but I am not willing to do anything but go to my job to get it,” said Barnes, whose story was told in the Ridley Scott film American Gangster in 2007.

The Tom Folsom book Mr. Untouchable and a documentary of the same name also detail Barnes’ criminal enterprise that earned him at least $5 million in the years before his 1977 conviction.