Here are the latest updates:

It has been nearly two months since Qatar implemented a series of measures to contain the outbreak of COVID-19, the highly infectious respiratory disease caused by the novel coronavirus.

In our latest episode of Talk to Al Jazeera, Qatar’s minister of public health, Dr Hanan Mohamed al-Kuwari, discusses the country’s plans to combat the coronavirus.

Japanese Prime Minister Shinzo Abe and US President Donald Trump have agreed to cooperate closely in developing COVID-19 vaccines and drugs, and in their efforts to boost their economies.

The two leaders held telephone talks as they seek to reopen businesses in their respective countries.

“It was extremely meaningful to be able to reassure Japan-US cooperation via telephone talks between the two leaders just as the international society is expected to unite and tackle the (pandemic),” Japan’s Chief Cabinet Secretary Yoshihide Suga told reporters.

The number of new coronavirus cases in Russia rose by 10,699 over the past 24 hours, bringing the nationwide tally to 187,859, the coronavirus crisis response centre said.

It was the sixth consecutive day that cases had risen by more than 10,000, but down on Thursday’s record daily rise of 11,231.

It also reported 98 new fatalities from COVID-19, bringing the total death toll in Russia to 1,723.

Afghanistan’s Health Minister Ferozuddin Feroz has contracted the COVID-19 disease, as the war-ravaged country sees a surge in cases of the virus, officials confirmed.

Waheedullah Mayar, spokesman for the health ministry, told Anadolu news agency the minister had experienced symptoms of the coronavirus for the past few days. He got a positive test result on Thursday.

“The health minister’s health is stable, and he is under isolation at his residence,” he added.

Malaysian business has been hammered by a lockdown imposed in mid-March to try contain the new coronavirus pandemic, according a government survey.

Some 42.5 per cent of the 4,094 companies surveyed by the Department of Statistics said they will need at least six months to recover from the restrictions, which until Monday required people to stay at home unless buying essentials or commuting to work.

Malaysia’s retail sales fell 5.7 per cent to a seven year low in March, the department reported separately, with unemployment climbing 17 per cent year-on-year to reach 3.9 per cent.

Queues formed outside gyms in the semi-autonomous Chinese city for employees to check temperatures as people celebrated the return of some normalcy to the city.

Large-scale parades to mark the 75th anniversary of the end of World War II in Europe have been downsized.

The anniversary of Nazi Germany’s 1945 unconditional surrender after a war that cost 50 million lives is a holiday in Berlin this year.

German Chancellor Angela Merkel and President Frank-Walter Steinmeier are due to lay wreaths at the country’s main memorial. 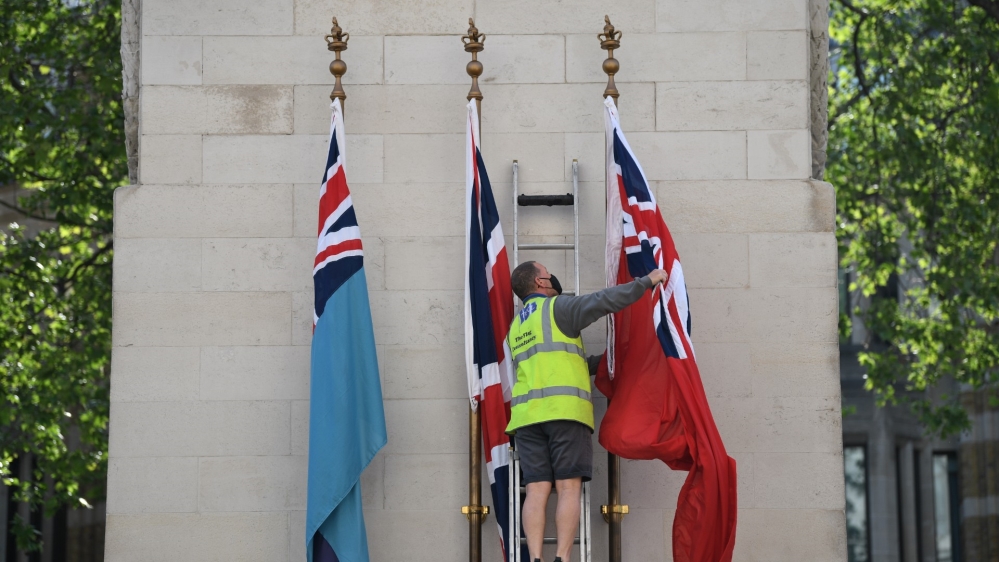 Ceremonies across France have been drastically scaled down, although President Emmanuel Macron will still be attending an event on the Champs-Elysees.

In the United Kingdom, street parades by veterans have been cancelled.

UN Secretary-General Antonio Guterres called for an “all-out effort” to end the “tsunami of hate and xenophobia” sparked by the novel coronavirus pandemic, without naming specific countries.

“Anti-foreigner sentiment has surged online and in the streets,” Guterres said in a statement. “Anti-Semitic conspiracy theories have spread and COVID-19-related anti-Muslim attacks have occurred.”

According to Guterres, migrants and refugees have been “vilified as a source of the virus – and then denied access to medical treatment.”

#COVID19 does not care who we are, where we live, or what we believe.

Yet the pandemic continues to unleash a tsunami of hate and xenophobia, scapegoating and scare-mongering.

Hello, this is Saba Aziz in Doha, taking over the live updates from my colleague Ted Regencia.

Thailand on Friday reported eight new coronavirus cases but no deaths, bringing the total to 3,000 cases and 55 deaths since the outbreak started in January.

Of the new cases, three are from the southern province of Yala where authorities are aggressively testing the population due to high infection rates. Five other new cases are migrants who have been detained at an immigration detention centre in southern Songkhla province.

Slowing numbers of new cases have prompted Thailand to cautiously allow some businesses this week to reopen after weeks of semi-lockdown. 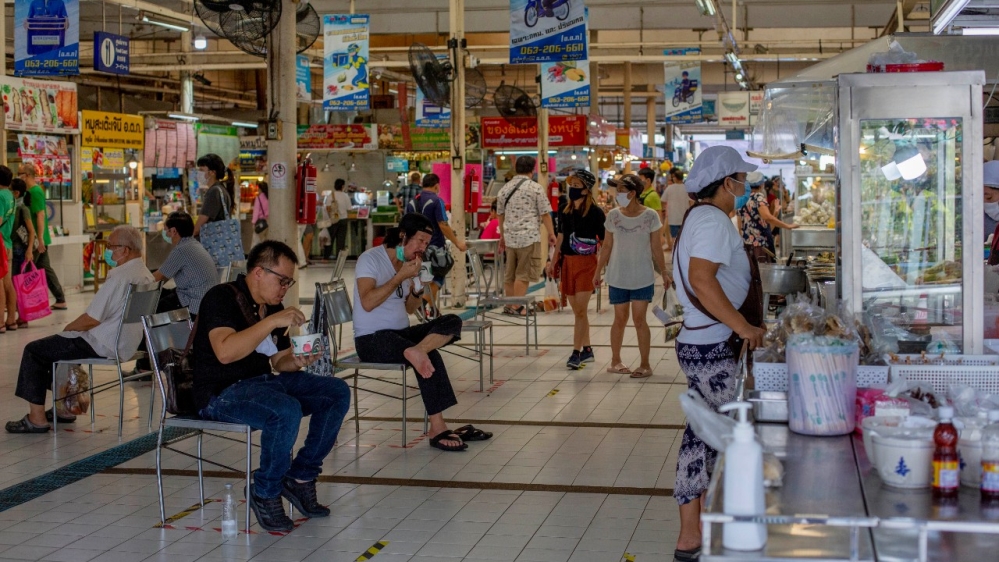 Former Japanese diplomat Yukio Okamoto, a one-time adviser to prime ministers and expert on ties with the United States, died late last month after contracting the novel coronavirus, his consultancy confirmed on Friday, according to Reuters news agency.

After retiring from the foreign ministry in 1991, Okamoto, 74, served as an adviser to then-prime minister Ryutaro Hashimoto on thorny issues related to Okinawa, home to the bulk of US troops in Japan.

He also advised then-prime minister Junichiro Koizumi from 2001-2004 and was a research fellow at the Massachusetts Institute of Technology’s Center for International Studies.

“This is a shock. And from the coronavirus!” said Tokyo Governor Yuriko Koike said on social media. 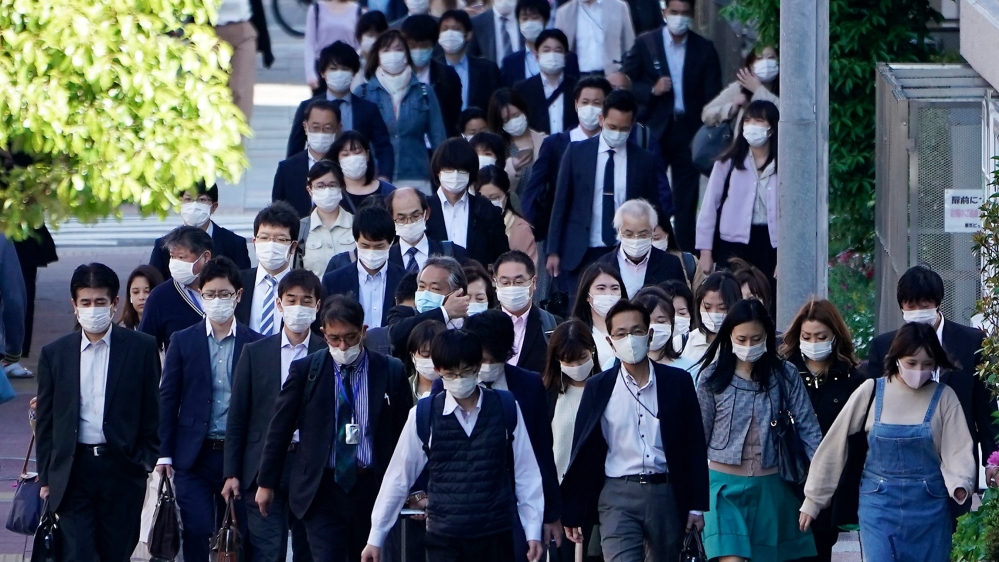 Many governors across the US are disregarding or creatively interpreting White House guidelines for safely easing restrictions and letting businesses reopen amid the coronavirus pandemic, an Associated Press analysis found.

The AP determined that 17 states did not meet a key benchmark set by the White House for loosening up — a 14-day downward trajectory in new cases or positive test rates. And yet many of those have begun to reopen or are about to do so, including Alabama, Kentucky, Maine, Mississippi, Missouri, Nebraska, Ohio, Oklahoma, Tennessee and Utah.

Asked Thursday about states reopening without meeting the benchmarks, President Donald Trump said: “The governors have great power as to that, given by us. We want them to do that. We rely on them. We trust them. And hopefully they are making the right decisions.”

The weak readings make it a near certainty the economy suffered a second straight quarter of contraction in January-March, the technical definition of a recession, and was on track for a deeper decline in the current quarter as the health crisis kept shoppers home and businesses closed.

Argentine President Alberto Fernandez has received a 68.5 percent approval rating in April over his handling of the country’s response to the spread of COVID-19, buttressing his political clout as he faces off against creditors with a major debt revamp.

Argentina is in a nationwide lockdown, which has been extended until at least May 10, helping slow the spread of new confirmed COVID-19 cases, which total just over 5,000 with 270 deaths. That is far less than in nearby Chile, Peru or Brazil. 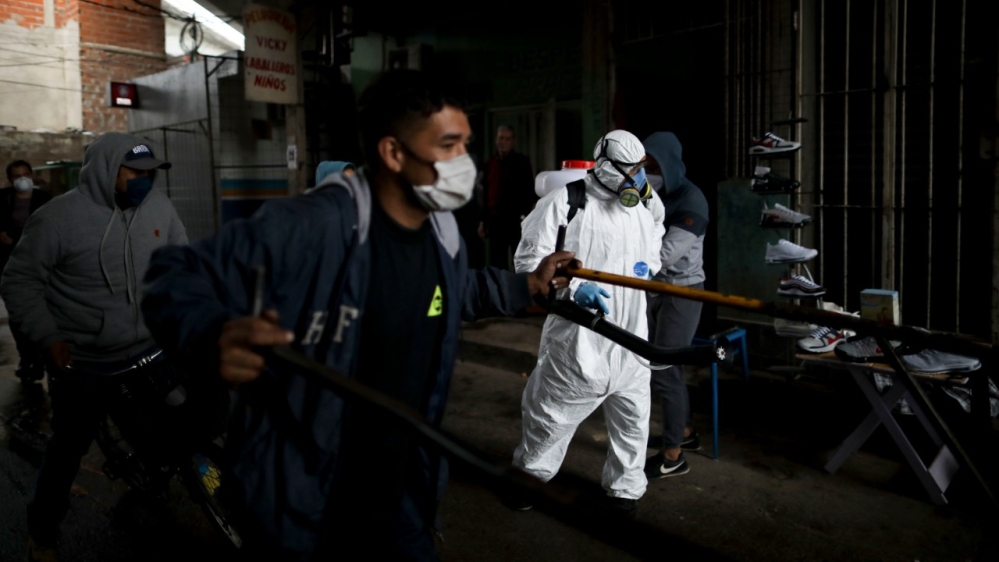 A man disinfects a street in the “Villa 31” neighbourhood of Buenos Aires, Argentina on Wednesday [Natacha Pisarenko/AP]

The eyes could be an “important route” for the coronavirus infection to enter the human body, according to researchers from Hong Kong.

The South China Morning post also quoted University of Hong Kong scientists as saying that the virus is 100 times more infectious through the eyes and airways than SARS.

With fewer than 20 new infections each day, Australia’s Prime Minister Scott Morrison on Friday began talks with state and territory leaders to decide which restrictions will be eased.

The easing will carried out in four-week increment  to ensure measures do not lead to a resurgence in infections, two sources familiar with the plan told Reuters.

Residents of an impoverished part of the Honduran capital, Tegucigalpa, have clashed with riot police after blocking the burial of a person suspected of having died from the novel coronavirus, according to a Reuters news agency witness.

Riot police fired tear gas when the residents armed with rocks burned tires and blocked a road leading to the Amor Enterno Cemetery with stones and construction material in the La Era neighbourhood, the witness said.

The Central American country has so far reported 1,461 coronavirus cases, many of them in the capital, and 99 deaths. Residents said their neighbourhood lacked adequate sanitation for such burials.

For key developments from yesterday, May 7, go here.