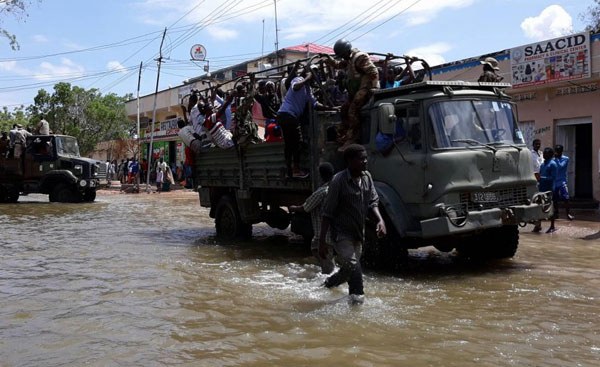 Flooding in Somalia has affected 574,000 people, displacing 370,000 of them, the UN Office for the Coordination of Humanitarian Affairs (OCHA) said Friday.

The October flooding, which was unusual for this time of year, has taken humanitarian agencies aback as there is less funding and flexibility in the humanitarian operation, said the OCHA.

Prior to the flooding, much of the country experienced drought conditions. As a result, harvest yields were up to 70 percent below average in the south.

In addition, many of the affected communities are the same ones that suffered severely during the 2016-17 drought crisis, which brought the country to the brink of famine. With little time to recover between shocks, communities are highly fragile and coping mechanisms have been eroded, said the OCHA.

Although many humanitarian agencies are re-directing their assistance to flood-affected communities, there are not enough resources to cover everything. As a result, they have launched a flood response plan to raise 72.5 million U.S. dollars for a three-month swift response, said the OCHA.