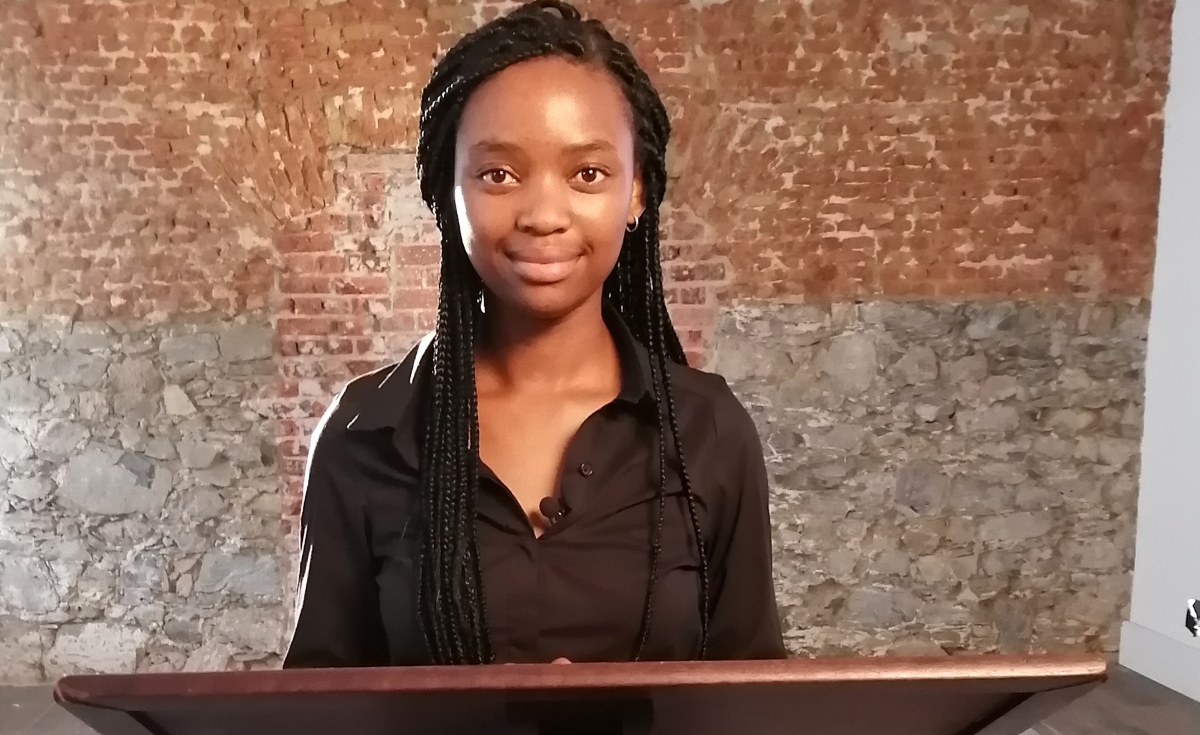 The Desmond and Leah Tutu Legacy Foundation announces with regret that Greta Thunberg has withdrawn from speaking at the 10th Desmond Tutu International Peace Lecture to be held on Archbishop Desmond Tutu’s 89th birthday on 7 October 2020.

Thunberg will be replaced by internationally recognised leader on climate change, Christiana Figueres. Figueres was Executive Secretary of the United Nations Framework Convention on Climate Change (UNFCCC) from 2010 to 2016.

During this time she brought together national and sub-national governments, corporations and activists, financial institutions and NGOs to jointly deliver the historic Paris Agreement on climate change. In the accord 195 sovereign nations agreed on a collaborative path forward to limit future global warming to well below 2°C, and strive for 1.5°C, in order to protect the most vulnerable. For this achievement, Figueres has been credited with forging a new brand of collaborative diplomacy and received multiple awards.

Since then Figueres has continued to accelerate the global response to climate change. Today she is the co-founder of Global Optimism, co-host of the podcast Outrage & Optimism and is the co-author of the recently published book, The Future We Choose: Surviving the Climate Crisis. Figueres sits on multiple executive and advisory boards and is a frequent public speaker and media commentator. She is a graduate of Swarthmore College and the London School of Economics. She lives in Costa Rica and has two daughters.

Figueres will join two young African climate activists, Uganda’s Vanessa Nakate (23) and South Africa’s Ayakha Melithafa (17). They will address the subject: Climate Justice Globally, Now and for the Future, with an emphasis on intergenerational dialogue and cooperation.

“Our world faces a double crisis,” says Piyushi Kotecha, CEO of the Desmond and Leah Tutu Legacy Foundation. “Humankind and the global economy have been ravaged by the effects of Covid-19, as we simultaneously witness wild blazes destroying vast areas of California and other climate ravages in all corners of the globe, threatening to destroy millions of livelihoods.

“There is a terrifying imbalance: While the human population has approximately doubled since 1970, global populations of mammals, birds, fish, amphibians and reptiles plunged by 68% between 1970 and 2016, according to the WWF’s Living Planet Report 2020.

“Writing for The Guardian six years ago in support of fossil fuel divestment, Archbishop Tutu lamented: ‘Our desire to consume any and everything of perceivable value – to extract every precious stone, every ounce of metal, every drop of oil, every tuna in the ocean, every rhinoceros in the bush – knows no bounds. We live in a world dominated by greed. We have allowed the interests of capital to outweigh the interests of human beings and our Earth.’

“We are running out of time to pull things back. The Foundation could think of no one better than these three outstanding women to address us this year.”

The 2020 lecture will be delivered via a specially-designed online platform that allows for simultaneous commentary, and the Foundation has put together an impressive lineup of commentators:

The Foundation and the lecture
Founded in 2013, the Desmond and Leah Tutu Legacy Foundation represents one of the world’s most iconic leaders, and his life-long partner. The Foundation strives to ensure their uncompromised bravery is celebrated, communicated and curated for posterity. The Desmond Tutu International Peace Lecture was conceived as an annual opportunity to take stock of issues critical to the sustainability of our species and our planet. It is an opportunity to access our adherence to the values of respect, compassion, fairness, Ubuntu and celebration of diversity. This year’s lecture was made possible by the generous involvement of The Motsepe Foundation and Old Mutual.

Vanessa Nakate
Nakate is a climate activist from Uganda. She was the first “Fridays For Future” climate activist in Uganda and is founder of the Rise Up Movement. Her work includes raising awareness about the dangers, causes and impacts of climate change, and making demands for action from public leaders that will mitigate against the effects of climate change or that will help to curb its progress. She spearheaded the campaign, Save Congo Rainforest and is working on a project that involves installation of solar stoves in schools.

Ayakha Melithafa
Melithafa is a 17-year-old South African environmental activist. It was while facing hardships two years ago during a period of severe drought in the Western Cape that she decided to take action to protect the environment. Melithafa joined Project 90 by 2030, a social and environmental justice organisation based in Cape Town. She also works as a recruitment official and spokesperson for the African Climate Alliance. Melithafa advocates for urgent climate justice in South Africa and the inclusion of diverse voices in climate activism. Climate justice is a term used to frame global warming as an ethical and political issue. Melithafa shares her knowledge and experiences in climate activism with the people in her community and tries to show people how to live with a low-carbon footprint.

Akhona Xotyeni
Xotyeni is a 23-year-old from King William’s Town in the Eastern Cape, South Africa. Recently recognised by the Mail and Guardian in its 2020 list of 200 Young South Africans and by the online publication Inside Education’s in its list of 100 Shining Stars for her contributions as a climate activist, she is a passionate environmentalist and humanitarian. Xotyeni is currently studying towards her Master’s in Environmental Management at Stellenbosch University. Her first degree majors were: Psychology, Public and Development Management and Sociology.

The poor governance system in the Eastern Cape and the state of apathy around it is what drove her to pursue an environmental and social justice path in order to advocate for the human rights and empowerment of people from marginalised and vulnerable populations. She calls for effective environmental policy implementation, climate literacy and awareness in South Africa and the inclusion of the youth in decision-making and implementation processes. Xotyeni is currently part of the African-European Youth Forum and is a student volunteer for the South African Institute for International Affairs Youth Programmes, particularly the Climate Change Working Group. She is also part of the United Nations YOUNGO Human Rights, Indigenous People and Food Systems Summit working groups.

Alia Kajee
Kajee is an adviser in the Climate Support Programme with the German aid organisation GIZ and was recently named one of Mail & Guardian’s Top 200 Young South Africans for her civil society work. With experiences ranging from corporate sustainability to grassroots movements, she hopes to emphasise climate change as a crisis of injustice with impacts disproportionately divided along class, racial and gendered lines. An eco-socialist at heart, Kajee believes in a democratic, inclusive and sustainable future for all. All contributions are in a personal capacity.

Greg Swift
Swift recently retired from decades of energy work at Los Alamos National Laboratory in New Mexico, USA. The main focus of Swift’s scientific research has been the invention and development of novel energy-conversion technologies. He received his PhD in physics at the University of California-Berkeley in 1980. In the semi-rural community where he lives, he also helps with irrigation infrastructure and governance.

Margo Adonis
Adonis is a passionate young leader that loves spending time in her community and investing in youth empowerment through educating future generations. With a BTech in Environmental Management and as a registered candidate scientist, she has founded Visions of Change; a NGO dedicated to the awareness of the environmental protection movement. Adonis mentors young scientists through the Eskom Science Expo platform and students from Cape Peninsula University of Technology Environmental Programme, where she is on the programme’s advisory board committee. She is passionate about environmental protection, access to environmental human rights and combating climate change.

Adonis, who is Miss Earth South Africa 2019-20, is involved in many beach and community clean-ups, water conservation and tree planting projects and initiatives, Sustainable Development Goal campaigns and environmental education.

Rajiv Joshi
Joshi is a pioneer of responsible business and social transformation. As an economist and renowned voice on global issues and ethics, he co-founded The B Team in 2012, which he led as its first MD until 2019. The B-Team was established together with some of the worlds’ most influential CEOs and former heads of state, to catalyse better business practices for people and the planet.Joshi is currently developing a platform for cultural transformation and radical collaboration called Bridging Ventures and is Special Adviser to Mission 2020, convened by former UN climate chief Christiana Figueres.

Joshi is executive-in-residence and advisory council member at the Oxford Säid Business School and a part-time Research Scholar at Columbia University’s School of International and Public Affairs. He previously drove the Global Call to Action Against Poverty, was a Trustee of Oxfam, and is former chair, and first minority-ethnic leader, of the Scottish Youth Parliament. Joshi was part of the Glasgow Anti-Racist Alliance and a publicly appointed member of the Equality and Human Rights Commission in Scotland and played a critical role in the establishment of the UN Sustainable Development Goals.