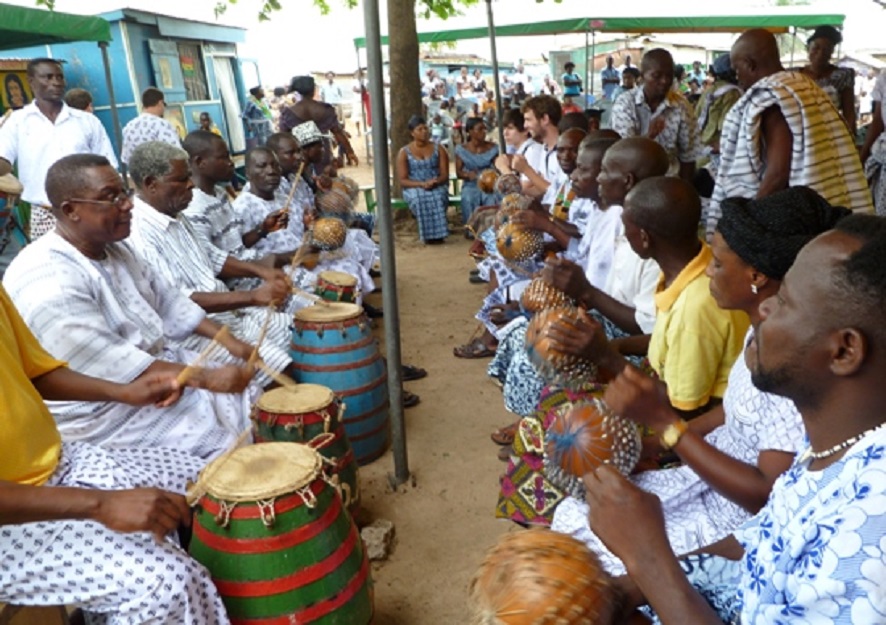 Numbering over six million strong, the Ewe people inhabiting southern Togo, southern Benin, southwest Nigeria, and south-eastern parts of the Volta Region of Ghana are an ethnic group with a patrilineal society governed by a hierarchal, centralized authority.

It is said the forebears of the Ewe, the Yoruba and the ancestors of the Aja, Fon, and Ga-Dangme lived in harmony till the expansion of the Yoruba people pushed the Ewe and related peoples westward.

The Ewe thus migrated from Ketu also called ‘Amedzofe’, a Yoruba town in modern Benin. The Yoruba founded Ketu by the fourteenth century. While some lived at Tado in present-day Togo from where they later dispersed in various directions, some returned east to settle at Allada from where they founded the Aja kingdom of Allada, Whydah, Popo and Jakin, and later the Fon kingdom of Dahomey in the early eighteenth century.

On leaving Ketu, the people split into two big divisions. One of these went south and in turn, divided into two. One of these sub-divisions went to found a settlement on the eastern side of River Mono and called it Tado, according to accounts.

In Notsie, ca. 1500, their host king Adela Atogble received them well but his successor, Ago Akoli, proved himself a tyrant. Having ordered the murder of Ewe elders, he ordered the building of a defensive wall around the city of Notsie. The entire community known as ‘Dogboawo’ lived together, each unit in its individual ward under its own head under the king.

The Ewe, meanwhile, hid an elder, Tegli, in a sacred grove to solicit ideas from him. It was Tegli who advised the Ewe women to form the habit of throwing wastewater which included menstrual blood at portions of the wall to weaken it overtime for the grand escape they desired.

The vile Notsie king had also for his entertainment tasked the Ewe men and women to drum, sing and dance through the night for hours. During one of such performances, Tegli, himself a mystic, was carried to the grounds where he drew the “Sword of Liberation,” summoned the gods, and pierced the wall proclaiming, “O Mawuga Kitkata, wuwo na mi ne miadogo, azo adzo” (Oh great God Kitikana, open the door for us so that we walk through).

During the flight from Notsie under the leadership of Torgbui Tsali, the people fled to freedom divided into three major groups. One group settled in the northern part of the new home. It founded the towns of Hohoe, Matse, Peki, Kpando, Awudome, Alavanyo, Kpalime, Agu, Ve, Kpedze and Wodze. The second group founded the settlements of Ho, Akovie, Takla, Kpenoe, Klevi, Sokode, Abutia and Adaklu.

The third group settled in the coastal region of the new homeland. It founded Tsevie, Be – which later gave birth to Agoenyive, Bagida and Lome, Abobo, Wheta, Anlo, Klikor, Ave, Fenyi, Afife, Tsiame, Game, Tavia, Tanyigbe, and so on.

No single ‘Ewe Duko’ (Ewe State) was able to permanently impose its authority on the others and thereby create a unified state although the Anlo and Ge tried to expand to attain boundaries that would ensure prosperity and political power, according to accounts.

Defeating the Ada People in a surprise attack and later gaining control of the Volta Lake, the Danish company set its eye on Anlo. Prior, Europeans transacted trade on board passing vessels but from about 1720, the Dutch and later the English and Danes began to establish lodges at Anexo, Aflao, Keta and Woe.

In March 1784, the Danish Governor of Christiansborg secured a force among the Ga, Ada, Krobo, Akwapim and Ge all of whom had become traditional enemies of Anlo and with an army of 4,000 troops, defeated the Anlo.

However, the military defeat of Anlo rather united the neighboring Ewe states to Anlo. The result was that other ‘Dukowo’ like Dzodze, Klikor, Fenyi and Wheta began to identify themselves with Anlo and regarded them as their champion against foreign imperialism.

Owing to the destruction of the Atlantic sea waves, Keta lost its place of pride to Anloga which is now the chief city and soul of the Anlo State.

Among the Anlo corrupted as ‘Awuna’ by the early European merchants and slave traders, the chieftain is the ‘Awomefia’, whose three senior chiefs, in times past, commanded the three military divisions of the state. The kinship is vested in two royal clans, the Adzovia and Bate whose local units at Anloga “provide the Awomefia, adhering strictly to a rotary system.”

Anlo proper includes the coastal belt lying between Anyanui at the estuary of the Volta Lake, and Blekusu located about five kilometers east of Keta. It also extends north of the Keta Lagoon as far as Abor more than 40 miles.

The coastal strip, which is “sandwiched” between the sea and the Keta Lagoon, makes Anloga an important fishing location, according to sources. The people engage in subsistence agriculture and grow crops like cassava, maize, pepper, and vegetables. An onion (shallot) growing industry abounds. There’s also a thriving ‘kete’ weaving industry and poultry production.

Cultural traits of the Yoruba are visible with the Anlo-Ewe spanning ancestral worship, the worship of deities and divination (Afa Kaka) perfected by the former while in Nigeria.