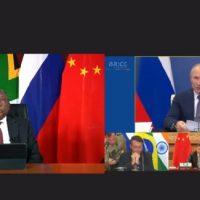 President Cyril Ramaphosa of South Africa joined China’s Xi Jinping in calling for cooperation and unity in the fight against COVID as leaders of the five developing BRICS economies met Tuesday in a virtual meeting hosted by Russia.

“As South Africa and the African continent more broadly, we are grateful for the solidarity we have received from our BRICS partners, both through bilateral assistance and support for our continental response,” said Ramaphosa, who is also the current African Union chairman.

“While African leaders acted swiftly to contain the disease, it will take a long time for our economies to recover.”

“We call on our BRICS partners to ramp up investment in not just South Africa but across the continent, particularly in the manufacturing sector,” Ramaphosa said. “Investors from the BRIC countries will realize considerable benefits by investing in Africa, particularly with the implementation of the African Continental Free Trade Area from January 2021.”

The Chinese president echoed the pandemic concerns, adding fears over political as well as economic instability. In addition to his calls for multilateralism and unity in the face of COVID-19, Xi said China’s vaccine development efforts will include BRICS counterparts in Brazil, Russia, India and South Africa.

“We will actively consider providing vaccines to BRICS countries where there is a need,” said Xi, who also called for climate action from the BRICS nations.

“Global warming will not stop due to COVID-19,” Xi said. “We need to implement the Paris Agreement in good faith, stick to the principle of common but differentiated responsibilities, and provide more help to developing countries, particularly the small island developing states.”