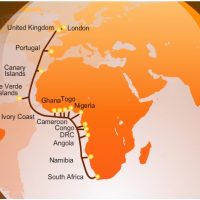 The repairs for two damaged undersea cables that run along the western coast of the African continent – cables that run from South Africa to the United Kingdom – are continuing but they’re not done yet.

The work is being done by crews aboard the Leon Thevenin, which left Cape Town on January 24 to fix the South Atlantic 3/West Africa Submarine Cable (SAT3/WASC) and the West African Cable System (WACS). The two separate lines were disrupted on January 16 and created a “perfect storm” for telecom companies and users in a number of African nations that rely on the connectivity.

“Rough conditions at sea and inclement weather seems to be the major factor directing the crew aboard the Leon Thevenin as they progress,” said OpenServe in a Tuesday update. The company is the infrastructure arm of South Africa’s Telkom and is responsible for coordinating repairs.

“The good news is that the repair currently under way on one of the affected segments of the WACS cable off the coast of Congo is nearing completion,” the company said. That means it will likely depart on Thursday for offshore Ghana to deal with the next break, with a tentative completion of February 17 for that site.

“This is subject to favorable external factors such as the weather conditions at sea,” said the company, which saw the ship originally delayed by poor weather when still in Cape Town and continued to encounter it. “Thereafter, the ship will proceed to the next break location of the SAT3/WASC cable and again, if all goes well, the work is set to be completed around 25 February.”

Complete repairs of the 16,000-kilometer system are expected this month, including an additional WACS break near the UK. That’s left dozens of service providers scrambling to respond to complaints and thousands of Africans dealing with absent or slow service, as the cable system feeds terminals on the west coast that connect to interior nations and locations.